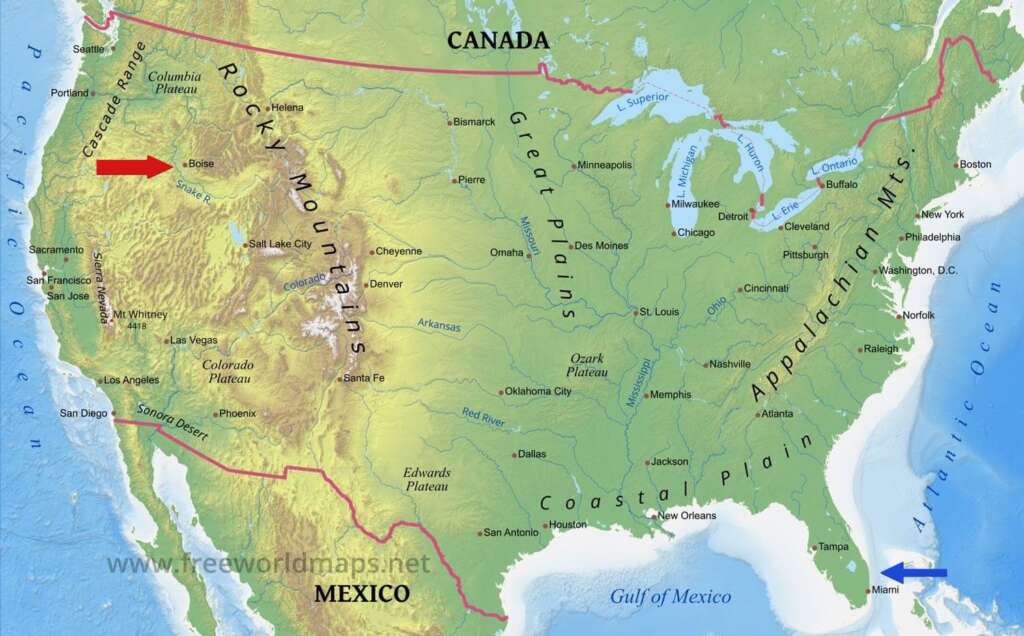 The term South Florida refers to the south-eastern tip of Florida, including Miami, Miami Beach, Fort Lauderdale, Hialeah, Hollywood, Palm Beach, the Keys and dozens of other cities totaling about six million people. Not in the entire state, but in this one corner of Florida. The diversity is literally off the charts, including people from every country, planet and inter-dimensional portal. South Florida is a tropical paradise with sandy beaches, blue warm oceans, summer all year long, blue skies, an abundance of flowers and foliage, killer alligators, massive hurricanes and a sun so bright it will fry your freckles off.

Boise on the other hand, is in the mountains of the Northwest, on the edge of a desert, far from anyplace. Less than 500,000 people live in the entire valley. There is cold, black ice, snow, cliffs, long winding single lane roads through mountains without guard rails, and Mormons.

Population
Florida has officially about 22 million people. Unofficially and far more accurate, about 27 million, counting all of the undocumented, space aliens and inter-dimensional residents.
Idaho? About 1.8 million, or the number of people robbed in South Florida during lunch time on Wednesdays. 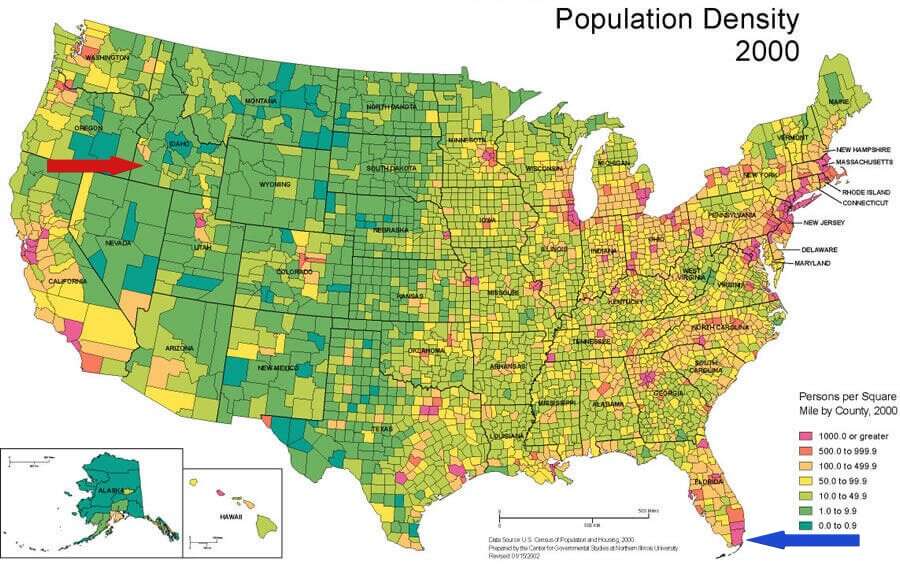 Type of people:
What type of people reside in the Boise metropolitan area? Pretty much plain white people and Mormons, AKA Latter Day Saints. Officially they only make up 26% of the state’s population, but they hold many of the professional and technical positions so their influence is far greater. Idaho is also a solid blood red state, where they call Republicans leftist. However, the small center of Boise is blue.

South Florida? Literally every nationality and ethnicity on Earth, or off earth. Seriously, if a true out of space alien landed in downtown Miami with seventeen tentacles, noses like shovel blades and several sparkling penises the size of motorcycles, they would go unnoticed. That is such the diversity of South Florida.

One of the things my friends and family back in Florida can’t quite grasp is the isolation of Boise. This is because Boise is really, really isolated! Check out the map below:

If you leave Boise heading generally south, there is nothing. I mean rocky jagged mountains, high deserts, a couple of rivers, but generally nothing for over 340 miles, until you hit Las Vegas, Nevada! Sure, you pass over or through some top secret military bases like Area 51 and a few others. But that is about it.

Just looking at the area around Boise, you can see there is nothing but mountains, deserts and farmlands. For ever. Talk about isolated!

This is a total alien concept for many people on the eastern side of the Mississippi River, especially Florida. Some of the large cities in Florida include Miami, Fort Lauderdale, Orlando, Tampa and Jacksonville. Then there are plenty of smaller cities like Gainesville, Naples, Fort Myers, Palm Beach, etc.

Essentially, you are never more than a short walk from some other city or town in Florida.
Not so in Idaho. The only area that comes close to qualifying as a city at all is the Boise metropolitan area, which includes Boise, Meridian, Garden City, Kuna, Caldwell, Nampa, Eagle and a bunch of other towns in the Treasure Valley.
This entire valley area probably has less than 500,000 people.

This is one of the things I find exciting about Idaho. There are so many places to explore, and so few people to get in your way. It is beautiful and unique.

Isolation Syndrome:
There are hundreds of cities and large towns in Florida so there is no isolation. If a city wants to do something, they can benefit from how other towns in Florida did the same thing. Idaho? Not so much. There are no close cities or large towns outside of the Boise Metropolitan area. Thus, decisions are made in a vacuum. If it is a wrong decision, you don’t have any other place nearby to look at and compare.
If you can’t find Peter Pan peanut butter, you do without. You can’t just drive a few miles to the next city.

There is no next city outside the Boise area.
This isolation does something to the brains of people living in the Boise area. It seems to make them think alike, act alike and not ask many questions.

A Floridian in Boise!

Novel: The Face of Hope

Book: A Floridian in Boise

Buy a print with or without frame, a coffee mug, T-shirt & more. 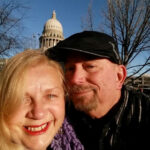 My favorite Jokes found online, some perhaps R rated and all insentive to someone.

Bible Verse of the Day

If you then, who are evil, know how to give good gifts to your children, how much more will the heavenly Father give the Holy Spirit to those who ask him!
Luke 11:13

This website uses cookies to improve your experience while you navigate through the website. Out of these cookies, the cookies that are categorized as necessary are stored on your browser as they are essential for the working of basic functionalities of the website. We also use third-party cookies that help us analyze and understand how you use this website. These cookies will be stored in your browser only with your consent. You also have the option to opt-out of these cookies. But opting out of some of these cookies may have an effect on your browsing experience.
Necessary Always Enabled
Necessary cookies are absolutely essential for the website to function properly. This category only includes cookies that ensures basic functionalities and security features of the website. These cookies do not store any personal information.
Non-necessary
Any cookies that may not be particularly necessary for the website to function and is used specifically to collect user personal data via analytics, ads, other embedded contents are termed as non-necessary cookies. It is mandatory to procure user consent prior to running these cookies on your website.
SAVE & ACCEPT
Skip to toolbar Log Out